I regret teaching my dog to lick my face

And for today, a great guest post from Thoughtsy of Thoughts Appear as she shares with us something that she immediately regretted doing. After reading this story, even though it is short, I felt very real pain for everyone involved, except the dog.

I immediately regret teaching my dog to lick my face

Never teach your dog “kisses.” Ever. Just stick to the basics, like “sit” and “stay.” Maybe even “shake” just to be polite.

Our new puppy, a cute little bundle of fur named Ozzy, loves to put everything in his mouth. Including my face.

To teach him that licking is ok but biting is not, I started saying, “kisses” and offering up my chin for the slobbery sacrifice.

Now Ozzy gives kisses on command as well as whenever he’s in someone’s lap. Most importantly, he never nips anymore.

On a ride home from the vet, instead of something going in Ozzy’s mouth, something came out. Puke. In the car.

While my boyfriend cleaned up, Ozzy and I went inside for some cuddling.

With his tail attempting to wag, Ozzy trotted over and collapsed into my lap, and we cuddled.

Boyfriend: Is he okay?

Thoughtsy: Yeah. He just needed some hugs and kisses.

As his panting, puky breath wafted up to my nose, I gagged. And Ozzy’s slobbery tongue licked not only my chin, but the inside of
my mouth.

Thoughtsy: The puppy just made it to first base!

Boyfriend: Let’s just make sure he doesn’t get to second…. 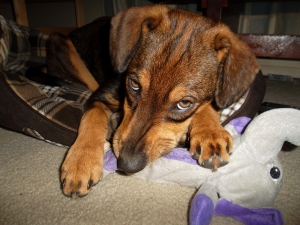 Ozzy practicing 2nd and 3rd base maneuvers on his toy.

I immediately regretted teaching Ozzy to lick my face at the word “kisses.”

I also regretted not buying more mouthwash the last time I was at the store.