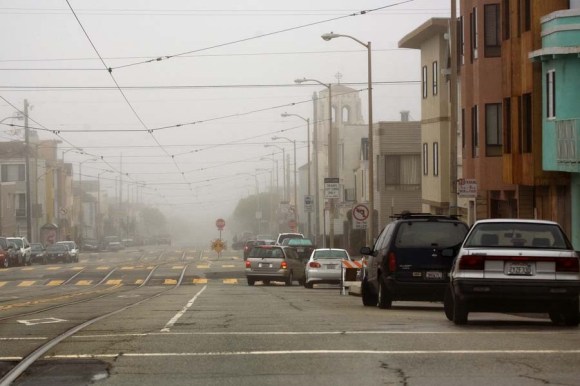 When living in the city gets too exciting, head to the sunset.

Stanley Kubrick loved to eat dry toast in the morning. A tortured, artistic, soul, he refused to put anything on his bread to soften its coarseness or ease its transition down the gullet, as he wished to be reminded of the dull, dryness of everyday life and its sad, petty cruelties, all of which he captured in his film 2001: A Space Odyssey, which he filmed in San Francisco in the neighborhood to be known as the Sunset.

The filming of 2001: A Space Odyssey took over ten years, largely because Kubrick insisted that the bulk of the movie be endlessly interweaving psychedelic patterns that he created by rearranging small pieces of colored felt on a gigantic black felt board. Because of the area’s damp climate, the felt board would invariably become wet and unusable from fog moisture, which leaked into the studio despite his best efforts, and the team would regularly shut down filming and have a pint or two at Durty Nelly’s, where Kubrick would always talk at length about the dry toast he ate every morning. After the fourth year, the film crew tired of the same spiel and especially the phrase “petty cruelties,” so it was a great relief when the film was finished and released to great critical acclaim, something that surprised everyone without exception. Stanley Kubrick ate an extra slice of dry toast the morning he read the NYT review because he tended to quash feelings of excitement with bland, unpleasant food.

At the time of Kubrick’s film involvement in San Francisco, the Sunset was called Fogtown, which was an accurate name though the residents hated being dismissed as fog dwellers and portrayed in the media as “too moist to be human.” The fog people would often protest the rampant media prejudice in the Financial District during lunchtime, when they would blockade the entrances to sandwich shops, cafes, and public transit entrances with their very bodies. The distress was unbearable and the stock market suffered accordingly after every suit was forced to pack a lunch during a full week of lunchtime lie-ins. The police department decided to take action.

Stanley Kubrick, an artiste, decided that the only proper way to experience the film of his heart’s desire was to project it on a sheet that blanketed a building, and shut down the entire downtown area in order to subject movie-comers, hot dog vendors, and passers-by alike to his brilliance. Besides, the fog people were planning another protest on the day of the movie’s release so most people were prepared for mayhem and un-productivity. Secretly, the police lay in wait with banana cream pies with which they would lure the fog people’s off their soggy bottoms and away from sandwich shops.

A carefully orchestrated blackness descended over the city, summoned from the incredibly disturbed and misunderstood mind of Stanley Kubrick. As the movie flashed onto the screen, downtown bustle ground to a halt, the only noise heard the occasional flapping of a tourist’s map. In the alleyways, police readied their pies for the fog people.

The film meandered, reached its climax somewhere, and then denouemented and ended. The crowd lay, sat, stood, or leaned in awe and confusion at what they had just seen. Munching on a piece of dry toast, Kubrick rose and spoke a few words, the most important of which were these:

“This was filmed in Fogtown over a period of ten years. I have grown old there and am now reaching the sunset of my life (he wasn’t actually old—he was just being dramatic), and I remember a day in January three years ago, when I saw the sun sinking into the ocean and imagined myself as similar to the sun, a brilliant orb also seeking the depths, which I have found now in the sunset of my years because of this movie (again, he’s just being dramatic), and in the neighborhood that shall now be known as The Sunset.”

And the people did cheer and everyone did eat banana cream pie and the name stuck.

And that was fake history. Because research takes time.