It’s Called a Chicken Biscuit, and it’s a Piece of Fried Chicken on a Biscuit and it is Heaven 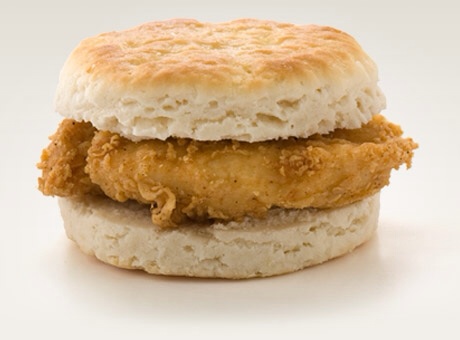 “I’ll have a chicken biscuit.”

Okay, that was pretty good. Try saying it again like it’s 10:23 on a Saturday morning.

“I’ll have a chicken biscuit.”

I think we’re getting there. Say it again, and it’s 10:24 on a Saturday morning. You’re wearing flip flops, wind shorts, and a tank top with an eagle on it. It’s 87 degrees outside but cold as ice inside and you haven’t had anything to eat all morning. You just parked your car in a gravel parking lot that bordered a field that bordered a southeastern forest. Also, add a sweet tea to your order because you’re in Georgia, stupid.

“I’ll have a chicken biscuit and a sweet tea.”

Okay, I think that’s it. You did it. You ordered a chicken biscuit without making yourself look foolish. Congratulations.

I heard a story once about a man who asked what a chicken biscuit was. After a moment of silence, he was told that a chicken biscuit is a biscuit with a piece of fried chicken on it. Lucky him, he got to eat those words. It’s an astoundingly simple dish that confuses people who look for complicated answers.

But there’s no complication here, just some lightly breaded and fried chicken between two halves of a tender, flaky, buttery biscuit. Feel free to add honey to it, if that’s your thing. Or maybe you’d like some hot sauce, or some strawberry jam. At this point, you can make it into your very own frankenchickenbiscuit sandwich because it already has everything it needs to be incredible.

I went simple and got just a chicken biscuit and slathered honey all across that mother busker. As I took bite after tender, flakey, chicken-y bite, I could only think of how much better off the world would be if they had this kind of delight in San Francisco, and Bozeman, and Indianapolis, and Rome, and anywhere there are humans that enjoy eating food for sustenance, community, and sheer pleasure.

Sure, we’d have to watch what we ate for the rest of the day and not make a habit of eating chicken biscuits for breakfast more than once a week, but we could do it. If we can put a man on the moon, if we can post millions of pictures of ourselves on the internet and call it a social movement, then we can moderate our biscuit intake.

That’s all I’m asking for. I’m just a woman with a college degree in international relations asking to spread the biscuit love across the US. It’s not too hard, is it?

6 thoughts on “It’s Called a Chicken Biscuit, and it’s a Piece of Fried Chicken on a Biscuit and it is Heaven”