The 24-Hour Starbucks on California Street 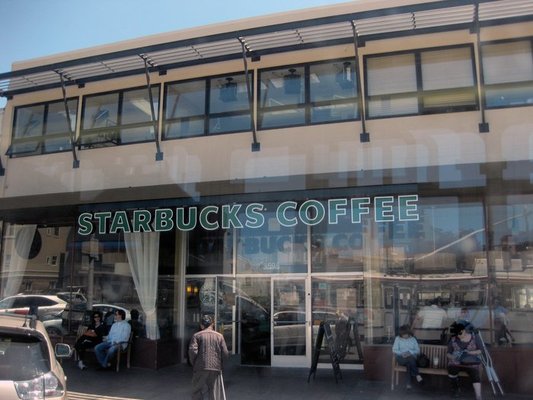 Perhaps you’ve heard of it. If you have, chances are you either live in the Inner Richmond or Laurel Heights, are/were a student at USF, or were driven to satisfy an unbearably intense craving for steamed milk one lonely Tuesday night in San Francisco.

This Starbucks is one of those places where anything could happen, where reality is suspended in a kind of mayonnaise, and humans that normally should never be within 5 feet of one another’s conversations are working, staring, and eavesdropping amongst each other, the same question running through their minds:“What are they doing here?”

I went there for the first time after my office Christmas party in December, and was glad for the liquid strength I had to cope with the experience since it was, at times, a grotesque affair. Indeed it spoke heavily of the fragile human experience (more about this in my 200 page, single-spaced, tiny-fonted, unedited, FREE ebook.)

I arrive slightly after 11:00pm, still disappointed from a completely drama-less soiree with people I’d hoped would be more interesting.  The place is completely and entirely packed, with at least 100 entities in the place (including computers) and nary a seat to be found.

A slightly manic pulse is in the air. It is finals week, after all, and greasy law students are still trying to mash thousands of syllables into their brains. The students I can understand, but who are  these other people hanging out (lurking?) with no discernible purpose? I grab the last seat available and pull out my notebook and pen, about to attempt writing in this bizarro-world.

To my left was a group of older women involved in some kind of enterprise. They had an even older and shorter companion with them in a black wool coat that went all the way to the ground, and she was in a bad way health-wise. Her ankles and shins were swollen and oozing, wrapped in some kind of tissue.

She fidgeted with them for a while until one of her companions says, “Elizabeth (can’t remember if that’s actually her name), you have to clean this up. That’s infection.” And so she shuffles, hobbles to the bathroom, and while she’s gone her companions talk about her and how she needs to go to the hospital and how stubborn she is. Their disgust and frustration is palpable and horrifyingly audible.

Above all, I remember them talking about the smell of her infection, and I was wondering what kind of hell I was in and what kind of hell she (Elizabeth) was in. I wasn’t getting much writing done, and my balance of reality and of what was possible had been tilt-a-whirled by this mysterious case of incredibly sad leaky shins.

Elizabeth came back eventually and her friends didn’t say anything to her. When she decided to leave later, they wouldn’t call her a cab. A stranger did, and she left.

It’s not my place to judge, but where do you go with a story like that? I’m not saying that’s what it’s always like at the 24-hour Starbucks on California Street, but for me it was a defining moment, me being unable to look away or unhear what I’d heard and unsee what I’d seen. Do you see what I mean bout too much reality?

11 thoughts on “The 24-Hour Starbucks on California Street”