Clay the Starbucks Guy Did Not Ruin My Life. 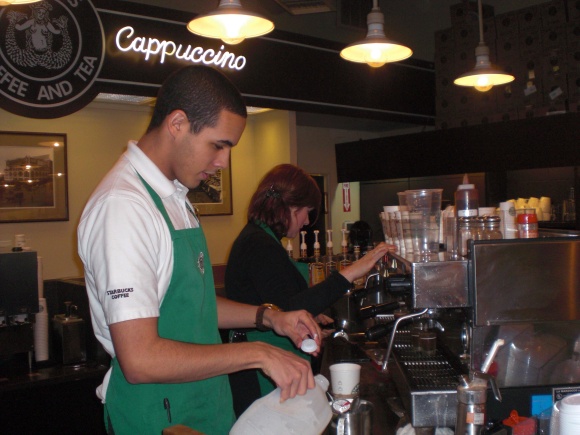 I was standing in line at Starbucks yesterday. My mental state was not good. In fact, it was poor. I hadn’t had time to put on deodorant because I was afraid of missing the train. Instead, I shoved it in my bag and then forgot about putting it on anyways. And I’d forgotten to use my ear eczema lotion. And I hadn’t had time to moisturize. So things were not good.

I was wearing uncomfortable shoes and after I caught the train I was afraid of missing, I’d ended up arriving twenty minutes early to my destination. Three miles away from me, on the floor in my room was the cup of coffee I hadn’t had time to drink. Everything was terrible so I decided to take the twenty minutes I had and walk to the Starbucks that I thought was five minutes away.

But it was not five minutes away, it was a ten minutes away. Seven minutes in to the journey, I was starting to sweat and my mental state – already fragile – nose dived (or nose doved – not sure what the correct phrase is here.) I remember speaking out loud, “Please. Please. Please,” willing the Starbucks to appear earlier to relieve my anguish. It was sad. What seemed like hours later, I arrived at the Starbucks, my neurons panting for caffeine.

There was a line. “That’s okay,” I tried to tell myself, “It’ll go fast.” Unfortunately this was not one of those uber-efficient financial district Starbucks, where employees have been choreographed to move through dozens of customers in five minutes with robot-like precision. This was a tourist Starbucks, and people had questions about the menu and time to debate over whether they wanted the pumpkin bread with cream cheese or the pumpkin scone.

There were only two people in front of me but it felt like an entire lifetime passed as they debated endlessly and pathetically over what kind of baked good they wanted to order, who they wanted to be when they grew up, how the family was doing.

Behind them a storm was gathering in my mind. I was summoning all the forces of darkness, all the black magic in the world to will them to finish their order and get their coffee, or perish. My hair grew long and wicked and floated up behind me as I grew fangs and my fingernails became yellow and razor sharp. I was ready to bring the reckoning and I knew who was at fault. It was Clay, the Starbucks employee. If he could just go a little faster then everything would be okay, but he was willfully and defiantly lethargic and the source of all terrible things in the universe and the gross black stuff that grows on my kitchen faucet.

Just as I was getting ready to be rude to him and/or cause him physical harm, I had a moment of clarity.

Wait a second, I thought. It’s not Clay’s fault that I was unprepared for today. It’s not his fault my armpits are stinking and my back is sweating. He didn’t choose the shoes I’m wearing or my career path. In fact, Clay has nothing to do with my anger or my life or my long, dark, wicked hair. He’s just here.

If I were in a better mood, nothing would be wrong. Even the colors would be brighter and the tourists’ inane conversation would be charming, possibly exciting. I am the problem.

With that in mind, the voodoo winds died down, my fingernails and teeth changed back to normal, I took a deep breath and forced a smile to my face.

“Medium coffee please – could you put some hot water in the bottom of it and leave room at the top for cream?”

Everything was going to be okay.

The 24-Hour Starbucks on California Street

Perhaps you’ve heard of it. If you have, chances are you either live in the Inner Richmond or Laurel Heights, are/were a student at USF, or were driven to satisfy an unbearably intense craving for steamed milk one lonely Tuesday night in San Francisco.

This Starbucks is one of those places where anything could happen, where reality is suspended in a kind of mayonnaise, and humans that normally should never be within 5 feet of one another’s conversations are working, staring, and eavesdropping amongst each other, the same question running through their minds:“What are they doing here?”

I went there for the first time after my office Christmas party in December, and was glad for the liquid strength I had to cope with the experience since it was, at times, a grotesque affair. Indeed it spoke heavily of the fragile human experience (more about this in my 200 page, single-spaced, tiny-fonted, unedited, FREE ebook.)

I arrive slightly after 11:00pm, still disappointed from a completely drama-less soiree with people I’d hoped would be more interesting.  The place is completely and entirely packed, with at least 100 entities in the place (including computers) and nary a seat to be found.

A slightly manic pulse is in the air. It is finals week, after all, and greasy law students are still trying to mash thousands of syllables into their brains. The students I can understand, but who are  these other people hanging out (lurking?) with no discernible purpose? I grab the last seat available and pull out my notebook and pen, about to attempt writing in this bizarro-world.

To my left was a group of older women involved in some kind of enterprise. They had an even older and shorter companion with them in a black wool coat that went all the way to the ground, and she was in a bad way health-wise. Her ankles and shins were swollen and oozing, wrapped in some kind of tissue.

She fidgeted with them for a while until one of her companions says, “Elizabeth (can’t remember if that’s actually her name), you have to clean this up. That’s infection.” And so she shuffles, hobbles to the bathroom, and while she’s gone her companions talk about her and how she needs to go to the hospital and how stubborn she is. Their disgust and frustration is palpable and horrifyingly audible.

Above all, I remember them talking about the smell of her infection, and I was wondering what kind of hell I was in and what kind of hell she (Elizabeth) was in. I wasn’t getting much writing done, and my balance of reality and of what was possible had been tilt-a-whirled by this mysterious case of incredibly sad leaky shins.

Elizabeth came back eventually and her friends didn’t say anything to her. When she decided to leave later, they wouldn’t call her a cab. A stranger did, and she left.

It’s not my place to judge, but where do you go with a story like that? I’m not saying that’s what it’s always like at the 24-hour Starbucks on California Street, but for me it was a defining moment, me being unable to look away or unhear what I’d heard and unsee what I’d seen. Do you see what I mean bout too much reality?