There is a good man who keeps the pergola 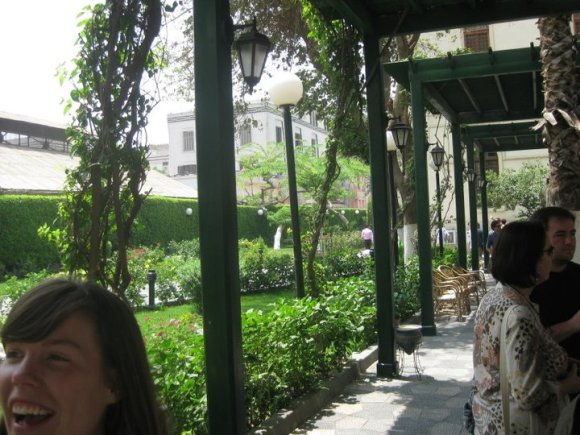 this is the only picture I have of the pergola: it’s the thing above us.

I do not know his name. He is the pergola keeper.

Right as one enters the metal detectors of the American University in Cairo: Tahrir Campus, there is a lush garden bisected by a 25 yard long pergola lined with wicker chairs and tables. A flower producing plant grows up and over the wooden structure, so the area is shaded and quite lovely to sit in and drink coffee and eat cookie during a break between classes.

All happenings in the pergola occur under the keeper’s careful eye. Every minute or so, a small red or purple flower falls from above only to be picked up seconds later as the keeper whisks by, having espied its descent immediately as it began. He walks with a slight limp and a gentle but determined manner. Should a student appear to need a table, he is at the ready carrying one over before being asked. As soon as the students leave, he rearranges the chairs and tables back to their original shape and waits for the next leaf or flower to fall.

I have never seen anyone so dedicated to the regulation of an outdoor area. I’m sure though he may have been interested in what was going on outside the university walls during the revolution, he wouldn’t dare leave his post for fear of a thick carpet of flowers or other plant debris covering the beloved walkway.

Not much is certain in life; at least we have the pergola keeper. Hell might be raised and the sky might fall, but he will guard his domain forever.