In New York City: The Big Apple Hanging from a Tree in Eden 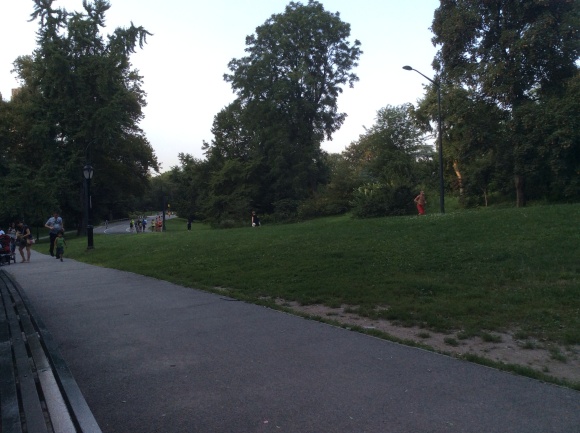 After exploring the madness of Manhattan today, I finally made it to Central Park where I could sit and try to finish what I think is the most boring book ever written. It’s called Brooklyn and I recommend it only if you want a book with absolutely no surprises.

I’d wandered for what felt like days through deserts of people and Duane Reade’s and Starbucks packed to the gills with people who asked to have their order changed and then accused me of taking their iced coffee. Swarms of people from every walk of life and if you looked anyone in the eye, they stole part of your soul. At least, that’s how it felt so I kept my eyes down or around.

All I wanted was to sit under a tree, which I finally did. I read my book and it was awful but awesome and I watched the legions of runners and bikers come over the hill, each one chasing their dreams of fitness. Some of them had already attained their fitness dreams and had revised them to make sure they still had something to work for.

It seemed they were all rushing off to the same place.

I thought of the book I had just read on How to Be Idle, which elevated taking it easy to a political act. Instead of rushing and trying to get things done quicker to make time which will invariably used for more work, the book advocated slowing down and taking the long way, to take up and use as much time as possible for truly living.

Busyness is infectious. When among bustlers, one bustles. When among joggers, one feels the need to jog or feels guilt and perhaps sadness at not jogging. When among people wearing nice shoes, one notices their own shoes more.

I don’t begrudge the joggers for jogging. I would probably do the same if I had been wearing athletic clothes. I do, however, begrudge the culture that promotes such falsehoods as faster is better and efficiency is happiness and more is better. I think these are lies. Like always, the truth is more complicated.

As I sat under the tree I contemplated how I’d exchanged one type of crowd on the city streets for another that was sprinting through the park. The latter was preferred because of the surrounding plantery but it was still interesting to consider how they were fruits of the same tree.

That’s why they call NYC the big apple. It’s an apple tree in the garden of eden, and it is the tree of the knowledge of good and evil and the tree of life and a coffee bean tree all rolled into one. But remember, once you taste it there’s no going back.