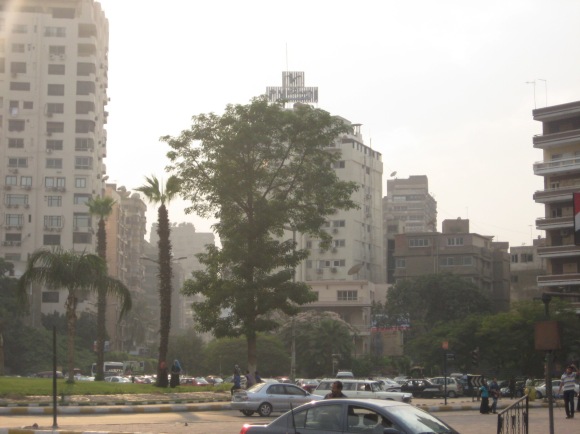 I think the hospital is in this picture. I almost died getting there.

(partially based on true stories)

Friend: My ears are still shot so I went to the clinic again today but they told me I need to go to the hospital. They have no idea what’s wrong.

Me: Ooo…that’s not great news. I hear Egyptian hospitals are horrendous. Like really awful places. Like I would probably choose to suffer soul-rending pain just in order to avoid stepping inside one of those hellholes.

Friend: (hesitating) Well there’s nothing else I can do…the clinic at the university said they’ve done everything they can for me. The medicine they prescribed hasn’t worked and I can’t hear a thing. Maybe I’ll at least get some better ear drops from the hospital.

Me: (chuckling) The hospital! The only thing they’ll get from them is a rash and a ticket to the insane asylum!

Me: (interrupting) So my boss told me about when he went to a public hospital because his employee’s  foot was pierced by an piece of rebar in a freak accident. Just poked right through like a pencil through paper. Pop! Blood gushing out everywhere, really gruesome stuff.

Friend: (concerned) Ewww…. So what was the hospital like?

Me: Well I’ll tell you what happened. They had no idea how bad their situation was until they saw the place that was supposed to treat them:  it was completely disorganized and crowded beyond all reason with desperate, sick people that had been camping out for days just to get into the ER. I can only imagine the haze from the bacteria growing in the air itself.

Friend: Did they get in?

Me: No! They had to go somewhere else, a “private” hospital where they still had to bribe their way in. And you won’t believe this: they had to pay just to use the elevator, even though the guy’s foot was literally a river of blood. Literally, a river of blood! And then they get to the hospital room and find all manner of wailing and chaos going on around them, blood on the walls, doctors frantically pouring liquid after liquid on the wound, which of course does nothing at all. It all seemed like a freak comedy act.

Friend: Which hospital was this?

Me: (ignoring the question) At last a real doctor comes along and sticks his finger right in the wound and wiggles it around while my boss’s employee is screaming in pain. Finally, my boss gets the doctor to quit it and they stitch they guy up with a dirty needle and some dental floss and then send him on his way. Last I heard, he’d lost all feeling in his foot along with 2 toes due to an infection he likely caught at the hospital itself. He’ll probably be subscribing to Prosthetic Fashions Weekly pretty soon! Hahaha!

Me: But you’re not going to a public hospital, so I’m sure your case will be different. Catch ya later!