If You Love Something, Strap Your Feet Into It 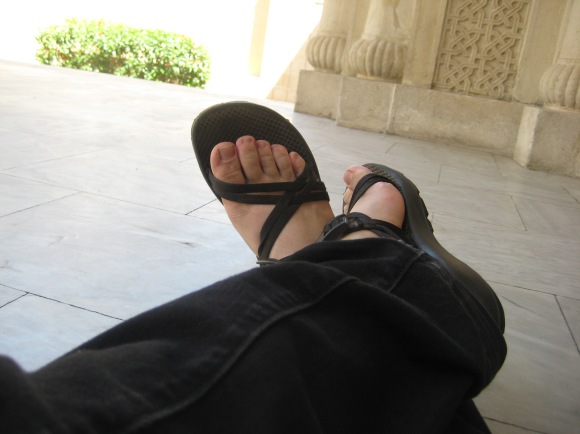 My shoes in repose.

More info about my Italy trip:

Before leaving, it crossed my mind that I might not stand out as much in Italy since the people look more Caucasian and I would be wearing black shirts, which I heard the Italians are prone to do. I could not have begun to fathom the depths of my ignorance.

First of all, Italians (in the regions I visited) are a people who have adapted to the sun by developing more melanin in their skin, giving it a nice tan color. I, in contrast, am of Northern European descent where people are still actively debating whether or not the sun exists more than 3 months a year. I was the pale needle in a bronzed haystack.

Second of all, mimicking Italian fashion requires more than wearing a black shirt purchased at TJ Maxx. The first problem was the fact it was just a frilly black shirt and not a tight tank top. The second problem is that I paired it either with jeans or  business casual slacks (Old Navy) instead of shorts, skinny jeans, or leggings. My backpack was also problematic, since it indicated I was either an elementary school student or a dirty hippy backpacker. Yet despite all these flagrant violations of well known fashion rules, the real deal breaker in my quest to blend in was my adventure sandals, also known as Chacos, that are so supportive the arch that can be seen from the moon. Only a sloppy tourist would dare be seen wearing something close to practical footwear, not including elderly people that have a prescription for their shoes and can’t fight off their nurse.

I proudly admit without shame that I am such a sloppy tourist, and I spent almost my entire European adventure in Chaco’s. These shoes, unlike humans, have never let me down. They lift me 1.5 inches above mysterious ground moisture. They keep my feet comfortable even after walking for hours on ancient Roman streets. They dry quickly should they become wet. They don’t bill me for therapy sessions. I am so dedicated to these shoes that I even wore them when I knew the occasion might call for something more formal, such a fancy dinner with my Italian host’s family. She donned an elegant coral dress and gold jewelry, her sister sparkled in a well tailored black cocktail number and fancy black flats, and I stood out in my wrinkled purple sundress and adventure sandals. I’m almost certain a group of Italian men was mocking me on my way to the bathroom, but I harbor no regrets especially because of what followed.

After dinner, we visited a medieval city full of steep pathways and slippery cobblestone lanes and aimed to climb to the highest point in order see yet another breathtaking view of the Italian countryside. While the others were inching gingerly along in their chic but impractical footware, I sprinted past them and left little puffs of adventure sandal dust in their faces. That night, I proved beyond the shadow of a doubt to myself and the entire world that fashion is never a substitute for functionality. A rib might break, and an ankle might roll, but my arches will forever remain supported. I don’t care what anyone else says; I love my adventure sandals.

111 thoughts on “If You Love Something, Strap Your Feet Into It”