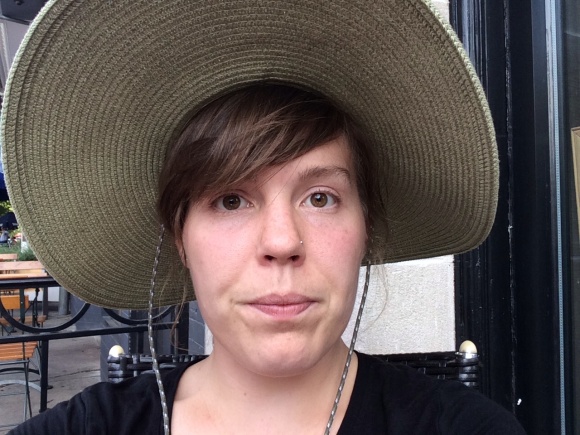 woman in the hat selfie

I was walking today, just doing my tourism thing in Capitol Hill and walking in the general direction of my destination but not too set on it. Like, I’m open to other adventures and stuff because if traveling isn’t about having adventures then I’ll just go ahead and eat my socks.

So I was walking today and noticing how the buildings in my neighborhood are so put together and made of brick, and how they all kind of remind me of senators from the 17th-18th centuries or whenever they still wore wigs. And I was just walking along doing my thing when I notice some free stuff on the road, like there’s a cardboard box full of cookie cutters and a desk and then there’s also this hat.

It’s just a sunhat that’s Columbia brand and either dark khaki or light green but it looks like it’s in pretty good shape, and I have pretty fair skin and was planning to be in the sun all day so I thought this was a fairly wonderful find. I put it on and was so stoked about it and kept on thinking to myself, “I found a new hat!”

And I wore the hat around all day and it was kind of a funny thing, you know. Like, I don’t usually wear hats. In fact, I’m a little weird about them. I think the people who wear them have some sort of ego complex. I always think, “Who do they think they are wearing that hat? Where do they get off accessorizing to such a high degree?”

But today, I was the woman in the hat. I wore that hat around all day and loved it. But the thing is, if someone saw me today they would just think that I was a hat-wearer by nature and that this was just something that I do, even though nothing could be farther from the truth. They wouldn’t know the difference. They would just think, “There goes a woman in a hat.”  Or they wouldn’t think anything at all and would just continue on with their lives like I do when I pass people on the street.

I assume I see people the way they are, but the reality is I know nothing. I don’t know what they usually eat, what their friends are like, if they come around these parts often, or if they wear hats. I can only see them in one moment and in one place. Maybe she just got that tattoo against her boyfriend’s wishes. Maybe he’s had those shoes for six years and can’t bring himself to throw them away. Maybe she just got back from a 11 month trip around the world and is experiencing massive culture shock.

I don’t know. So that’s the truth that hit me today: that I am the woman in the hat and I don’t know. Also, my hat is pretty awesome.

P.S. The selfies are out of control