Scooping Ice Cream for The Lord: A Week at Ridgecrest Conference Center 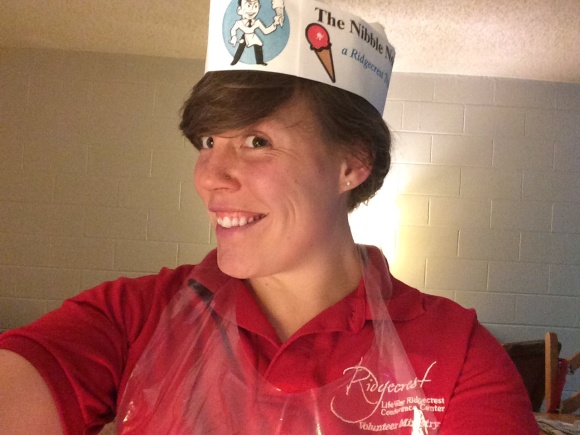 I’m in Ridgecrest, NC, which is about 17 miles west of Asheville and a million cultural miles away from any other city I’ve lived in. To be more specific, I’m at Ridgecrest Conference Center, a Baptist retreat paradise that has operated for more than 100 years in the Swannanoa Valley.

I’m volunteering for the week, and in exchange for scooping ice cream alongside Baptist retirees, I get free room and board and a whole lot of culture you just don’t find in San Francisco. It’s a pretty sweet deal – terrible pun intended.

This place is not exactly on the beaten path, and considering I’ve never been to Ridgecrest before, am not Baptist, and am under the age of 70, the first thing people want to know when we meet is how in the world did I wind up here in the Nibble Nook (the ice cream shop)(but seriously that’s what it’s called.)

The answer is simple really: Google. When I was planning my 7 week long post-quitting-my-job celebration trip, I wanted to do something in North Carolina before heading to Washington, D.C., NY, and Boston while I was still in the Southeast U.S. I also didn’t want to pay for food or lodging while traveling. Go figure.

I don’t know what happened first, but one thing led to another and on a very productive night at Starbucks, I sent some emails to conference centers in the greater Asheville area asking about opportunities for work or volunteering.

Eventually, I got in touch with Ridgecrest and signed up for one week of service knowing nothing about what I would be doing. Cut to 6 weeks, two buses and a cab ride later and I’m checking into my guest room at Spruce, the volunteer lodgings.

As I found out at breakfast the next morning, the volunteer program is almost exclusively for senior citizens, most of them from Florida, Georgia, Alabama and North Carolina. As I sat down at a table with a tray full of eggs and grits with people who were at least 50-60 years my senior, I wondered what on earth I had gotten myself into.

Long story short (more details to come later), it’s been much better than I thought it would be, even though sometimes I’m afraid I’ll blow my brains out after explaining one more time that I am from Oklahoma, but I live in San Francisco and I’m a triplet and I want to be Tina Fey when I grow up.

I’ve realized that the people here are good even though they’re not like my other friends. One woman is on a mission to be the world’s most helpful person. Every time I see her she asks if I need anything and gives me advice on something. Another woman is trying to get me a boyfriend. Another man is trying to fix me up with his son. Another woman told me about how her mother-in-law blew herself up because she smoked a cigarette while using an oxygen tank.

I have to say that it’s been refreshing to be around people who are different than what I’m used to. Most of these men and women have had close friends or spouses die, are retired, and have large extended families. Their life stories are mindblowing and they don’t even know it.

I’ve still got 3 more days left here, which will include a hike and pizza with a woman named Mickie who is 77 years old and spent 8 years in Zimbabwe after her husband left her. I’m also going to Asheville with her, which I hear is like a woodsier and smaller version of San Francisco, so it’ll be fun to hear her take on everything she sees. She’s Baptist, so I’m guessing there’ll be no afternoon beer.

If I did get a beer though, I’d toast to experiences that surprise you.

One thought on “Scooping Ice Cream for The Lord: A Week at Ridgecrest Conference Center”