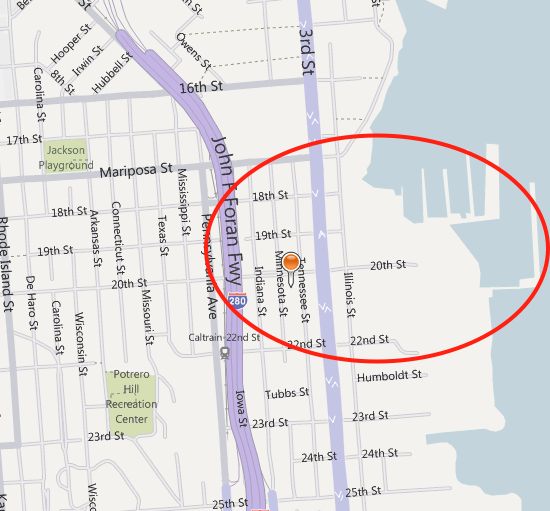 On some days you can still smell the toupee glue.

Dogpatch boasts one of the most unusual and other-worldly histories of all the micro-hoods in San Francisco. It borders Portrero Hill, a hamlet where a baby invented Kobe beef while high on marijuana, and on its other sides, Dogpatch nestles against the Bay and the lower armpit of SOMA, which occasionally splashes it with techie gang activity.

Its name history begins long ago, back when San Francisco was a playpen for 15-18 year olds who ran away from their homes in order to use drugs in parks, when the area to be known as the Dogpatch was dominated by a toupee factory. Don Ricketts was the name of the toupee factory founder and owner, a man who weighed 444 lbs and never left home without a fedora and a pair of scissors. He was married and divorced by the age of 16, and knew since then that his only love would be synthetic but realistic-looking hair for men and women and even a couple of canines.

For years, he ran the factory with a vicious regularity, churning out more piles of toupees than any other factory on the West Coast. Every night, Don would grin at closing time as he watched the merchandise go into storage, salivating over the predicted aging of the US population. So many bald spots to cover.

Then he was abducted by the aliens.

Lying in bed one night, looking out the window with his face mashed against the pillow, he noticed unusual light activity exactly where he often watched the colors change from red to green to yellow to red to green to yellow. There was purple and blue. And then a giant eye. And breaking glass. And something gooey. And then nothing.

When Don Ricketts returned to earth, he drooled uncontrollably and had lost all interest in synthetic but realistic-looking hair for men and women and canines. He laid off every single worker, except for the ones who knew how to brew a good cup of coffee, sold his factory with the caveat that he would always be able to sit and drink joe at the company café, and surrounded himself with drooly dog friends, partially for scientific study in order to determine the cause of the over-salivation, but mostly for companionship and the hair. He loved touching their very real, very long, dog-hair.

At the time of his death, he had exactly sixty-eight dogs, all of them named Patches, and all of them incredibly drooly. In his will, he specified that a shelter be built for them on the spot of his old café plus the surrounding area, and that it should become a park for droolers everywhere, both human and canine.

These provisions of the will were ignored completely, as Don Ricketts had no surviving family and only a resentful ex-wife. The dogs were indeed provided for, but the area designated to be a park was instead sold to other enterprising men and women, and the area became a gross industrial town that retained only the name of Don Ricketts’ dogs, which over time became corrupted to the present-day “Dogpatch.”

And that was fake history. Because research takes time.