Please Let Me Watch You Eat 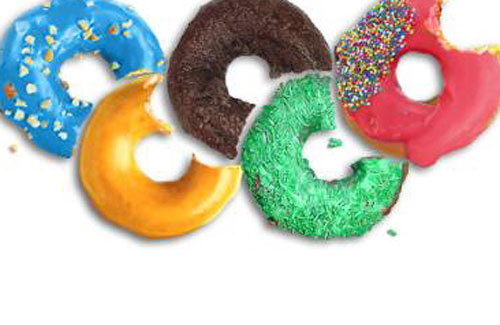 A million donuts? Two? When would they be satisfied?

The Olympics is a nationalistic meathead’s dream. Every four years, thousands of top athletes from all over the globe gather and bodily compete with one another, determining the greatest countries through sheer sweat and muscle, swimming, rowing, clawing, and back-flipping to the top of the doggy pile and victory dancing on the bodies of lesser countries. Thousands of pounds (kilos) of muscle writhing with one another in a city famous for tea and stony-faced soldiers: what fun!

Regardless of which Olympic event I’m watching, my reaction is always the same.  “Whoaaaaaaaahhhhhhhhhhhhhhh……………they’re so fast.” If I were an Olympic broadcaster, my narrative would go something like, “This woman is very fast, Bill, very fast. Did you see how fast she’s going? You know what, they’re all really fast. They should all get medals. Bill, the last time I ran, my knee started hurting after about five minutes so I stopped and went home. I’m 23, Bill. That woman is 39 and she is going very fast. Let’s go get her a medal.”

After going gaga over the sheer speed and athleticism, the fact most of these people could outrun various wild beasts and then spear them and carry their carcasses to the nearest hibachi grill at full sprint, I immediately move to the next logical topic of rumination: how much they eat. Seriously, how much food could a team of male gymnasts consume? Or female swimmers? What about the long-distance runners when they’re gearing up for a race? These “humans” are made entirely of muscle and work out for 90% of the time. Their caloric intake must be huuuuuge.

My Olympic dream is something quite simple: I want to go to an Italian restaurant with a group of Olympians, male and female, from all different sports. I want to point to the menu, say “We’ll have everything.” Minutes later, the entire staff of the restaurant emerges carrying silver platters loaded with mountains of pasta. And then I would watch, in awe, as the hungriest people in the world ate.

What would it be like? Would people lose limbs and wear protective goggles to prevent eye injury? Would they be civil but determined? How fast would it take to demolish the food on the table? When would they be hungry again? I have so many questions burning inside of me. Each time I turn on the television, they strike me again with the force of a discus. I see a man running, I wonder what he ate that day. I see a woman playing water polo, I imagine her going to town on eight big macs for breakfast. I MUST KNOW THE TRUTH.

We all know that the only true benefit of exercising is being able to eat more without gaining weight. Is the whole “Olympic” thing just a way to mask these people’s food addictions? And is there enough food in London for them to feed hordes of hungry Olympians? How much pasta would it take to satiate their appetites?

I exhaust myself with questioning. Perhaps I will never know. I turn to my oatmeal, and eat quietly.

21 thoughts on “Please Let Me Watch You Eat”