The Job I Want 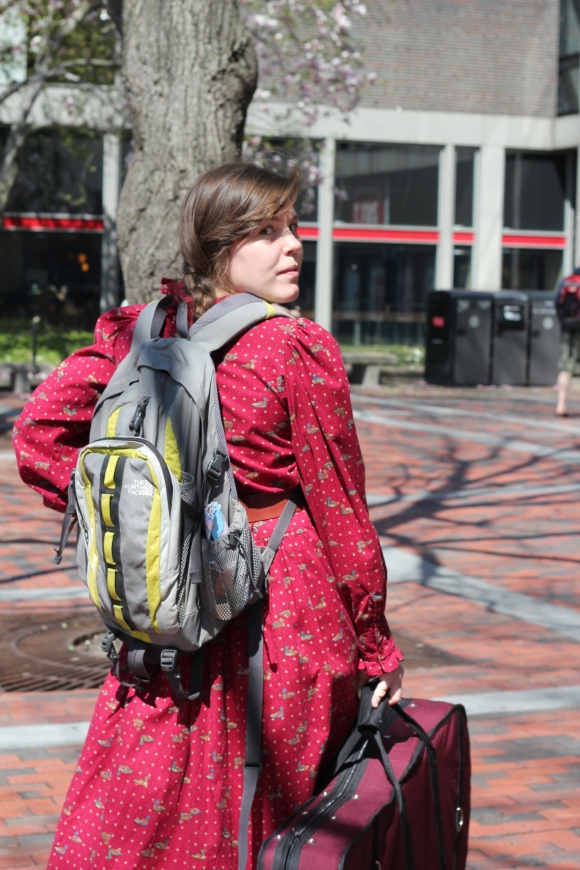 What I would wear as a professional square dancer, sans backpack

I just finished the book my mom had forced me upon me in an attempt to help mold my ethereal career path. It was a book called Quitter, in which Jon Acuff outlines the process of chasing, catching, and devouring your dream career. Aside from the fact that the book was casually written and could have used a good edit—this coming from a girl who is the published author of nothing—I found its advice helpful.

I am certain, however, that much like Plato in The Republic, Jon Acuff was advocating the opposite of what he stated directly. He encouraged people to be smart, evaluate risks, and continue working hard at one’s day job, all of which I interpreted as, “Follow your impulses, throw caution to the wind, and treat your co-workers like crap and your current job like the joke it is*.”

That brings me to my next point: skinny jeans.

I was astonished when I finished the book and found that Acuff had not addressed wardrobe renewal. Since wardrobe is the most important part of a career and because of “Dress for the job you want, not the job you have*,” I decided to update my wardrobe to match my dream of moving to San Francisco and being an indigent writer.

In a bold first move, I purchased a pair of dark skinny jeans. This inaugural pair of denim marks my transition from the oh-so-square world of boot leg and flare jeans to the hip, edgy, sub-world of skinny pants wearers. For years I have resisted this trend, and finally I realized that it was obstinacy in the denim department that was holding back my writing career.

As I wear these skinny jeans and they slowly age, fading, fuzzing, and developing holes in various places, I will not be able to replace them because I will be poor. These might very well be the only pair of skinny jeans that I will be able to afford for the next 5-7 years. However, the ragged appearance will only add to my credibility as an author and therefore this is a great investment.

In addition to the skinny jeans, I should also make improvements in other areas such as hair symmetry. My hair style is currently symmetrical, or rather, boring as all hell. Since hair-dos are the cherries on clothing sundaes, I will need to edge it up by going asymmetrical and highlighting its asymmetry with neon. This will, of course, be accompanied by a nose ring instead of a nose stud. I’ll know I’ve hit the mark when I get at least one or two blatant gasps out of my grandparents.

Final touches will include tattoos I can’t afford and a tube top, though I’m not sure if indigent writers wear those or not. More research is necessary. I also can’t decide if smoke-stained teeth are mandatory or merely a plus, but I’ll be sure to learn more after my initial visit to the West Coast in a few weeks.

Thanks for the career book, Mom! Can’t wait to go shopping! Can I borrow some money?

*Joke semi-borrowed from Parks and Recreation, a wonderful show

*Just to be clear, he doesn’t recommend those things, and the book  is actually good.

4 thoughts on “The Job I Want”