Leave your thug life at home 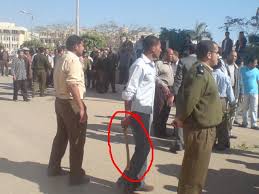 If you’re heading to the Sadat Metro stop and/or planning to enter Tahrir square at all, you best leave your guns at home. While you’re at it, forget about bringing along any knives, clubs, maces, and vegetable peelers you might traditionally carry with you. Now is not the time to practice transporting your archery set or collection of poisonous darts. If you happen to usually don a thug-like appearance, you should consider trying something else for a change, like wearing a floor length tiered jean skirt and a long sleeve turtleneck shirt emblazoned with either sparkly cartoon characters or nonsensical English words. Not sure if you have a thug-like appearance? If you look in the mirror and seem to be male, you are most probably a thug. If you seem to be male AND are over 5’8 and have darker skin, you are a thug and are a persona non grata in the environs of Tahrir square, which is in full blown sit-in mode.

Tahrir square has sprouted white tents, stages, signs, and new graffiti, heralding a new level of the revolution, despite the fact many Egyptians have grown weary of the continual instability. The square is occupied by groups of people demanding their demands be met. Yes, there are specifics for the people in the square but no, they do not actually help clarify the situation. One of the many consequences of the sit in is that the Mogamma, the center of Egyptian bureaucracy, was forcibly closed both yesterday and today, preventing the completion of much government business including the bribery of countless officials. Another consequence is the “tafteesh,” or security checks, now found at every entry point to the square.

The nature of the security check experience varies wildly from one entry point to another as there appears to be no standard procedure. It’s almost like these people didn’t get their tafteesh badge at Sit-In Camp for Budding Revolutionaries. Everyone from teenagers to dentists to adolescent girl helps out with the tafteesh. You could be asked for anything from giving your name, a passport, or an identity card to allowing them to examine your bag and ask you riddles. Sometimes they just let you through so long as your appearance is free of thug-like traces i.e. you are female (see above note).

Today I stupidly forgot to bring any form of ID with me to school, so I was lucky that both times I approached security, the “guards” let me pass through with nothing more than a smile. Other CASA students, however, had their bags checked and/or were prohibited from entering the square at all (one student). Tomorrow there is supposed to be a million man march to/in Tahrir but I haven’t heard anything about our classes being cancelled so apparently some people (our administration) were not entirely convinced it was going to happen. We shall see.

One thought on “Leave your thug life at home”